We would like to share the details of our upcoming maintenance schedule. Please note that during the server maintenance, you will not be able to access the game.

Note: As this is advance notice, the content and/or schedule may be subject to change depending on the circumstances. We'll post a notice if there are any changes.

<Interspace> was originally the first hideout for humans to escape from the grip of the extraterrestrial force, CRUX.

In contrast to the normal outer space, this is filled with gas and atypical dark matter, making it impossible to navigate normally which was a suitable hiding place against the alien forces. However, it was a place similar to an evacuation fortress that required much more effort in terms of development.

As humanity continues to develop, it naturally emerged from this refuge and expanded its power to the surrounding galaxy until Emperor Banon abandoned his position and lost its status as the capital of the empire. <Interspace> was the home for the second generation of humans, who carried out the migration, and was the center of the realm of humanity.

Also, in A.D. 3450, the massive invasion of the CRUX, where all humanity was connected through the Tenebris, faced a complete severance.

After the death of Emperor Banon, the Emperor's entourage, who managed to escape from the literally utterly destroyed Mapei galaxy, headed for the Tetmes galaxy. After Riya-Daybreaker, who saved mankind in the Battle of Light, Riya-Daybreaker's lineage leading to Emperor Banon led him to protect mankind and grow again in the name of the Empire. The emperor's entourage could not allow anyone outside of Riya-Daybreaker's blood to become emperor. They cloned Banon's DNA, which they had recovered at the last minute. The goals of Clone Banon and his entourage were clear. The Resurrection of the Emperor, the Resurrection of the Empire. In the Battle of Light, they take over the Tetmes galaxy, where humans first settled, and try to re-establish the nebula empire. 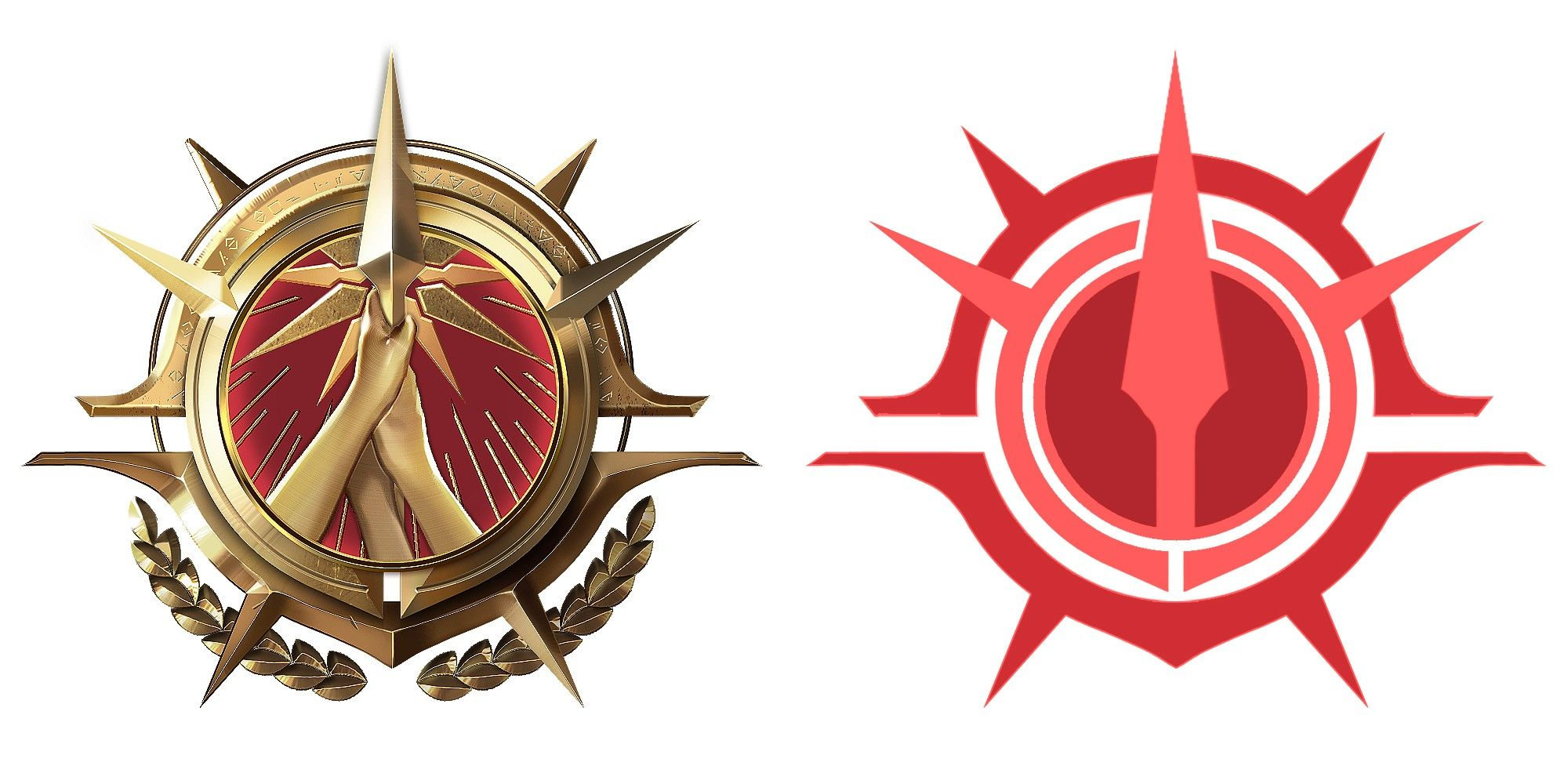 With the Great Invasion of the CRUX, Tenebris, which connected the Empire and each galaxy, was destroyed and the galaxies were disconnected and started their own war for survival. This was true of all galaxies - even the Empyrean tops sent to Interspace. They are based on Primus Soth, E.M.U. the council was guaranteed the right to independent action with one special envoy. Their mission is to restore all connections between Interspace and other galaxies. In order to fulfill her mission, Herma, under the name of the Empyrean Guild instead of the 'Trader's Alliance', seeks to connect the disconnected galaxies by gaining all control within Interspace. 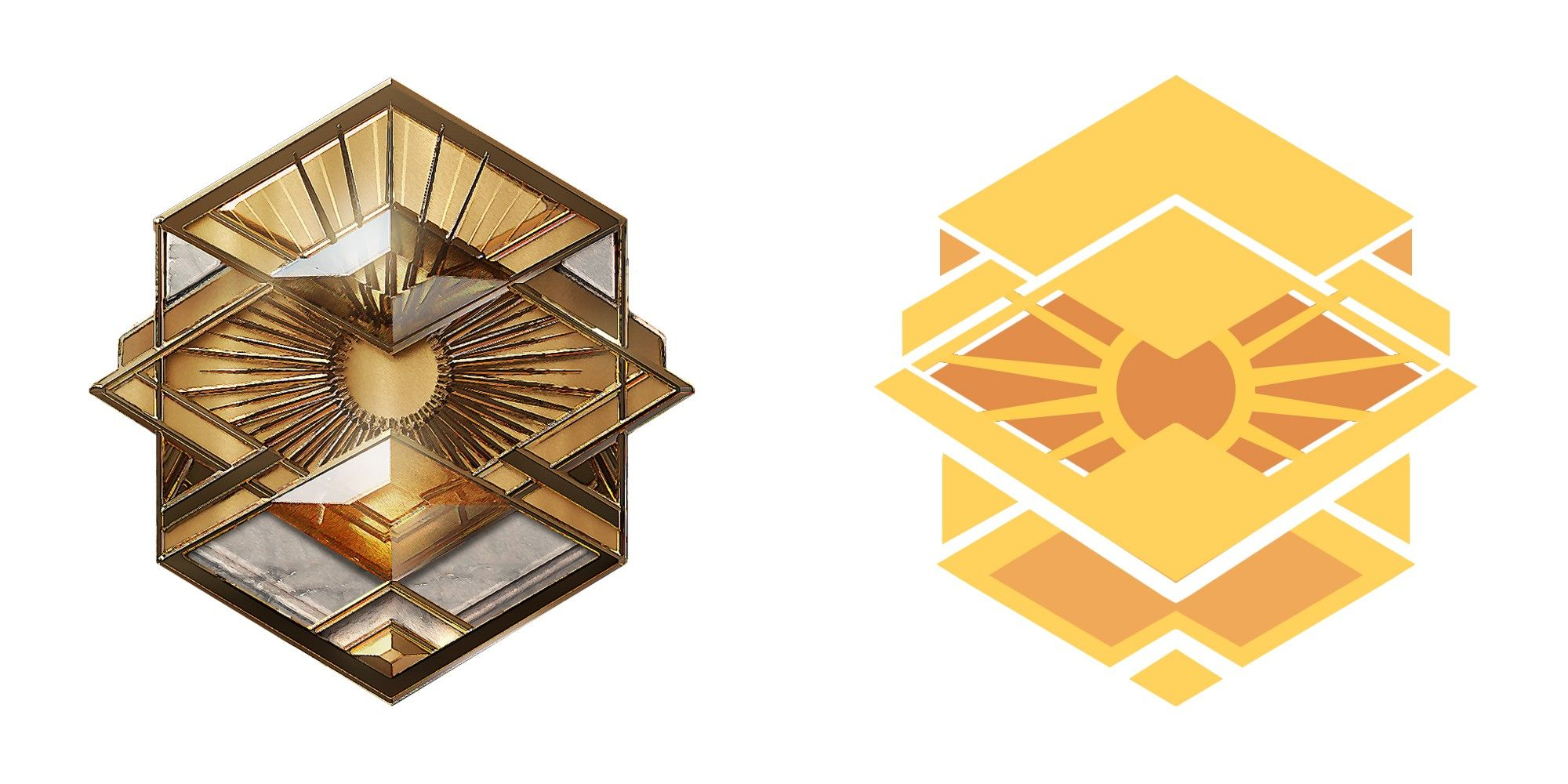 In Interspace, which has served as mankind's first settlement, the old capital, and the navigational control station, the Tetra AI that was being developed to replace the system 'RIYA', the administrative control system of the Nebula Empire, remained. Tetra AI is a system consisting of four AIs in charge of accidents, and while building a database through communication with system 'RIYA', system 'RIYA' was completely destroyed by CRUX, effectively becoming the only administrative control system. Based on the situation of the isolated interspace and the current situation of mankind, Tetra AI will conclude that the best way for the survival of mankind is the resurrection of the first Empress Riya-Daybreaker. In order to secure and clone Riya-Daybreaker's complete DNA element, Tetra AI wants to regain control of the interspace and restore the connection to the entire galaxy. 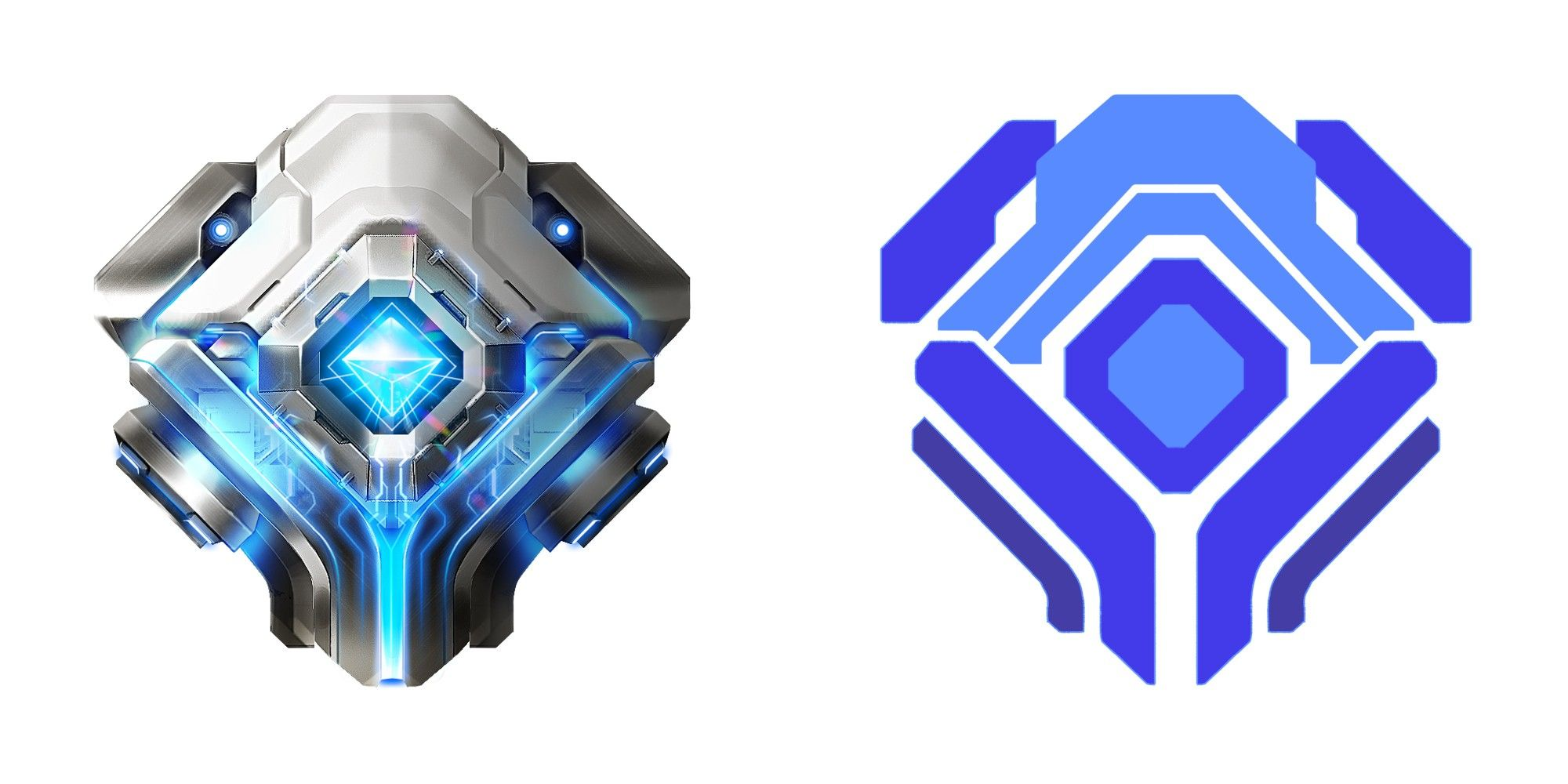 The chaos of Interspace, which was disconnected from other galaxies, also brought a great surprise to the pirates. As some of them built their own forces, pirates who did not belong to the forces were the only targets of subjugation. Among the pirates who are forced to lose in limited circumstances, Lukka, the captain of the Talos pirates, declares the unity of the pirates. Referring to Empress Riya-Daybreaker, who led the battle of light and built the nebula empire, the nebula empire started as a pirate, and in Interspace, a new beginning must also start at the hands of pirates, and he built his own power. They form a force called the 'Free Pirate Union' in the name of protecting the freedom of mankind and the freedom of pirates and fight to make Interspace their own universe. 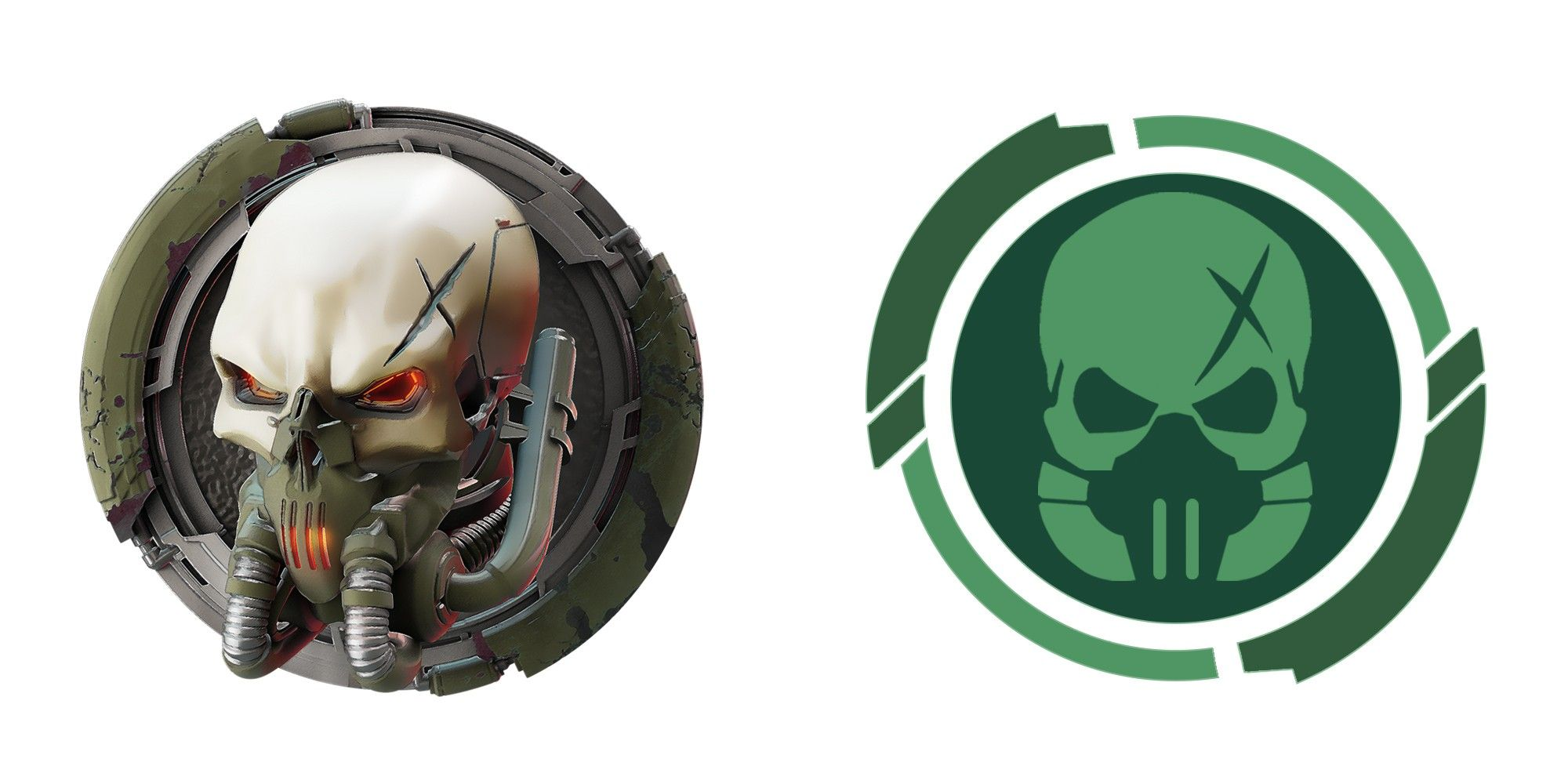 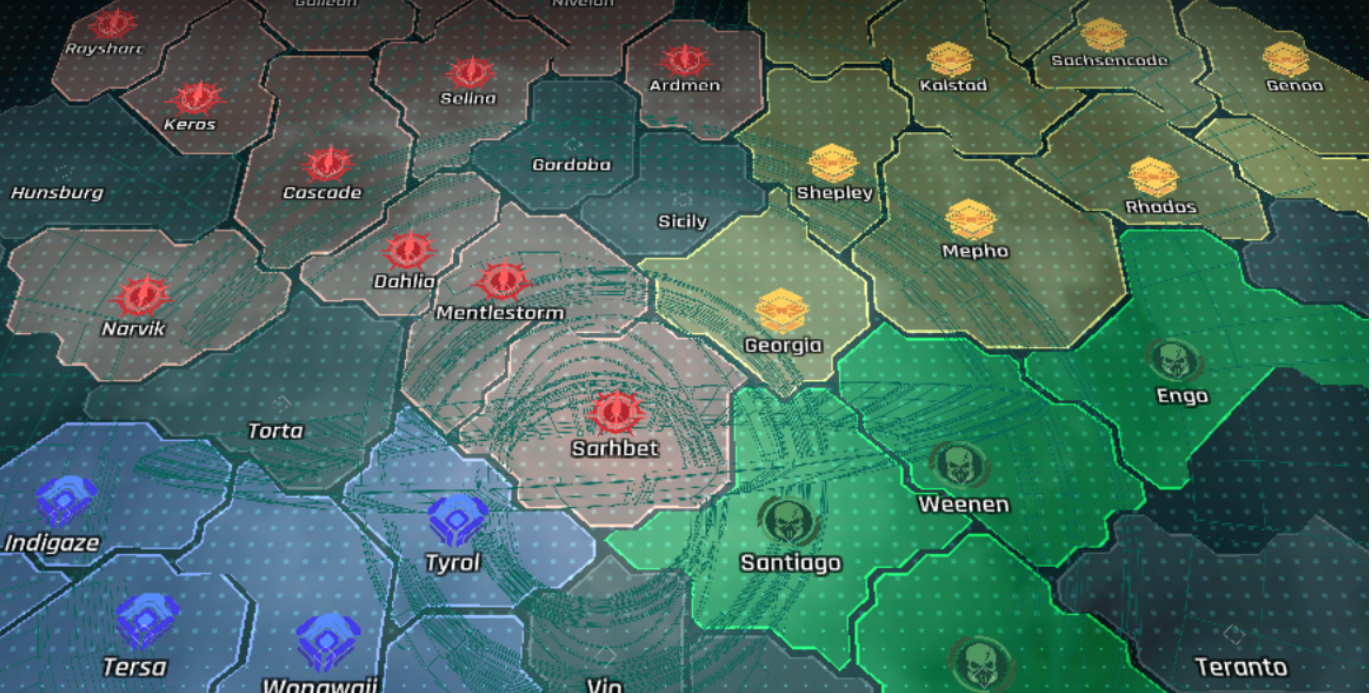 - The sector is in a neutral state when no faction occupies it. It remains neutral until all the Citadels in the sector are captured.

- When you successfully defended an enemy invasion, 4-hour protection is activated and the defense fleets at all bases are automatically restored. No other faction can invade protected sectors.

- The sector is occupied by a certain faction. It can be occupied by other factions in adjacent sectors at any time.

- Another faction has infiltrated a sector owned by a certain faction. Invasion status is maintained for 4 hours after status change. After defending all Citadels for 4 hours in the invasion state, it will change to the protected state. (Defense Success)

If more than one faction owns the Citadel within the time limit, the sector's ownership is changed to neutral.

- As the most basic unit base, it can receive support from up to 3 defense fleets. The purpose of occupying this base is to secure a movement path. 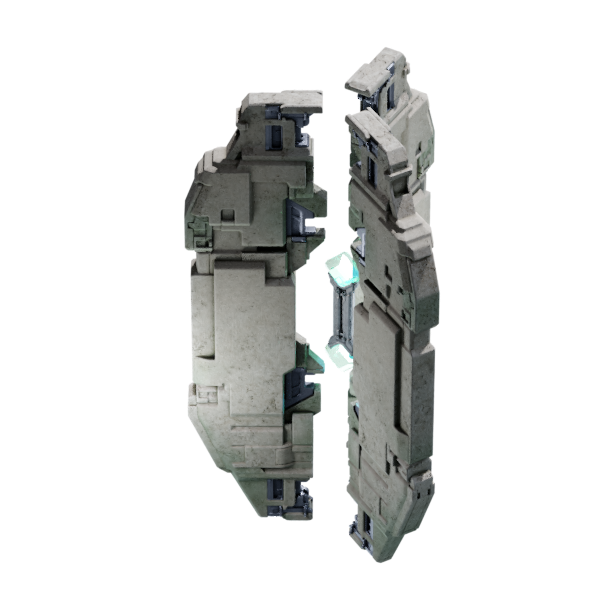 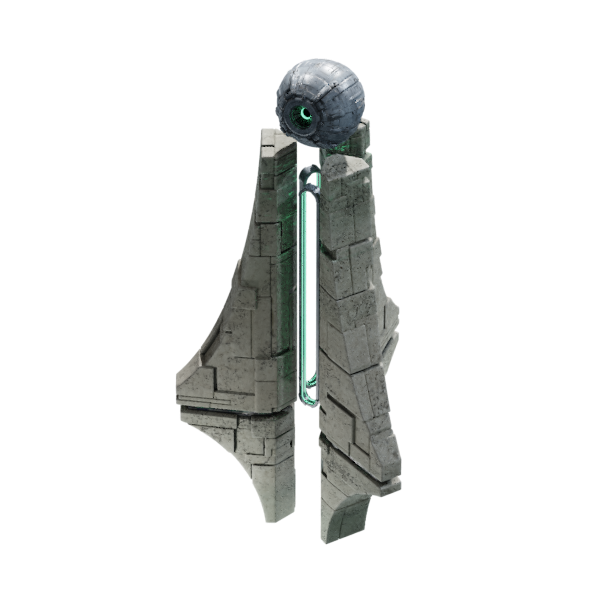 - It is a long-distance movement base that connects each sector. Basically, to get to another sector, you have to go through a connecting gate. Gates cannot be captured individually, and when all Citadels are captured, they will change along with ownership of the entire sector. 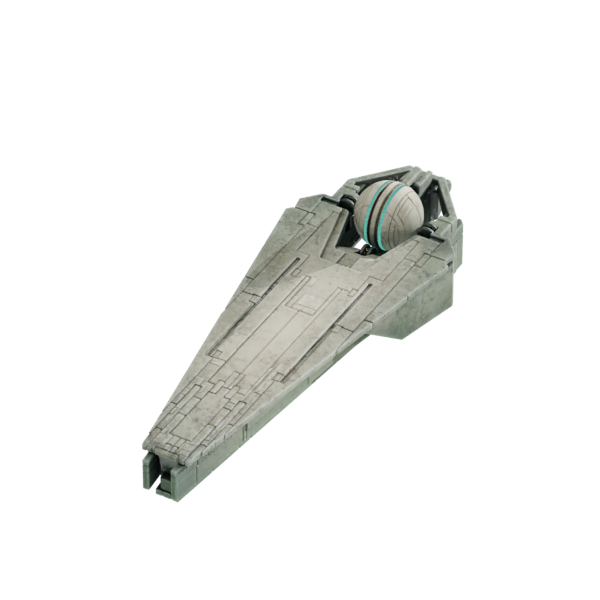 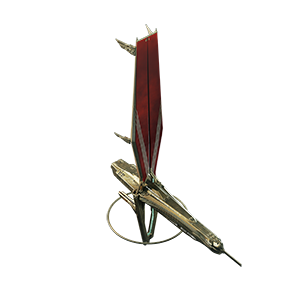 D. How to enter Interspace

- Increase max number of flagships in the expedition 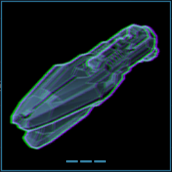 - Formation size is applied based on the capacity of the Space Dock facility level.

- Buffs that increase the size using heroes, ministers, policies, and others are not included. 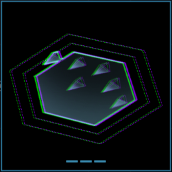 - When selecting a faction, the faction composition and occupation status can be checked.

- To change to another faction, you can select and join a new faction 1-day after leaving your previous faction. 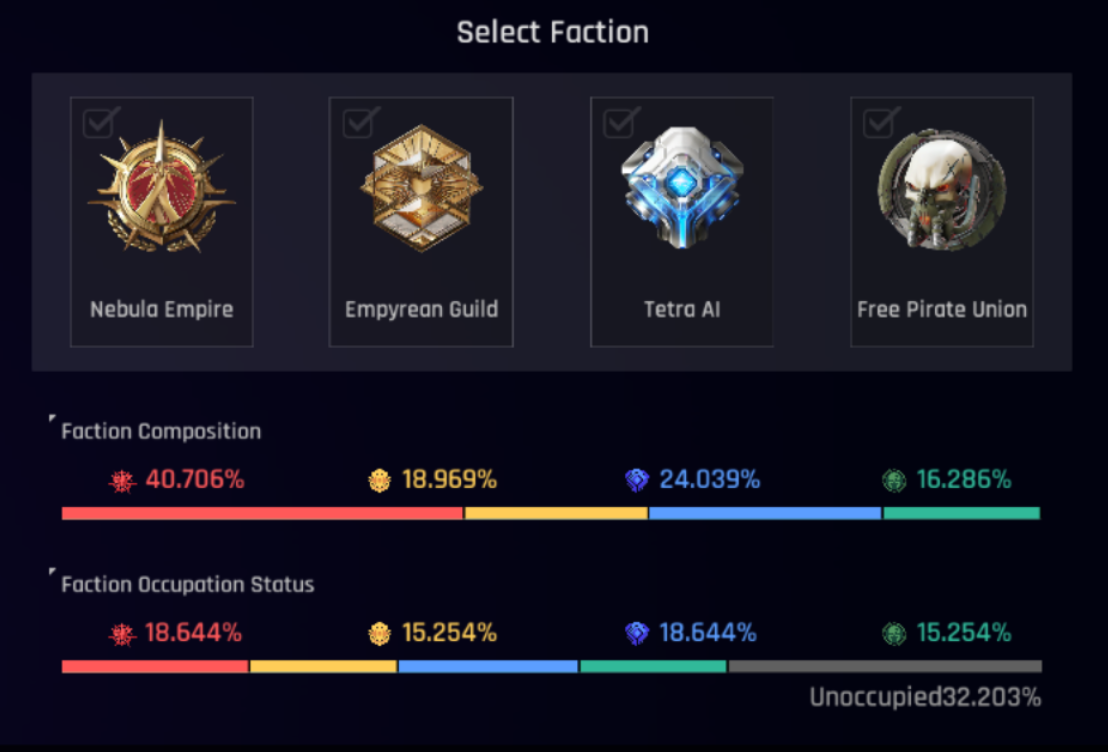 - The expedition is composed of flagships, non-flagships, and heroes.

- Deployed heroes and ships are moved to Interspace, and cannot be used in the regular galaxy.

- Only T5 or higher can be deployed. Position the flagships to the carrier and commanding fleet.

- Fleet Flagship: Up to 5 (requires research to increase the formation of the expeditionary flagship)

- Only ships of T8 or higher can be deployed

- Ships sent to Interspace cannot return to the regular galaxy.

- There is no limit to the placement of heroes.

- It becomes the standard for all activities on the interspace, and you can organize flagships, ships, and heroes waiting in the Galaxy. 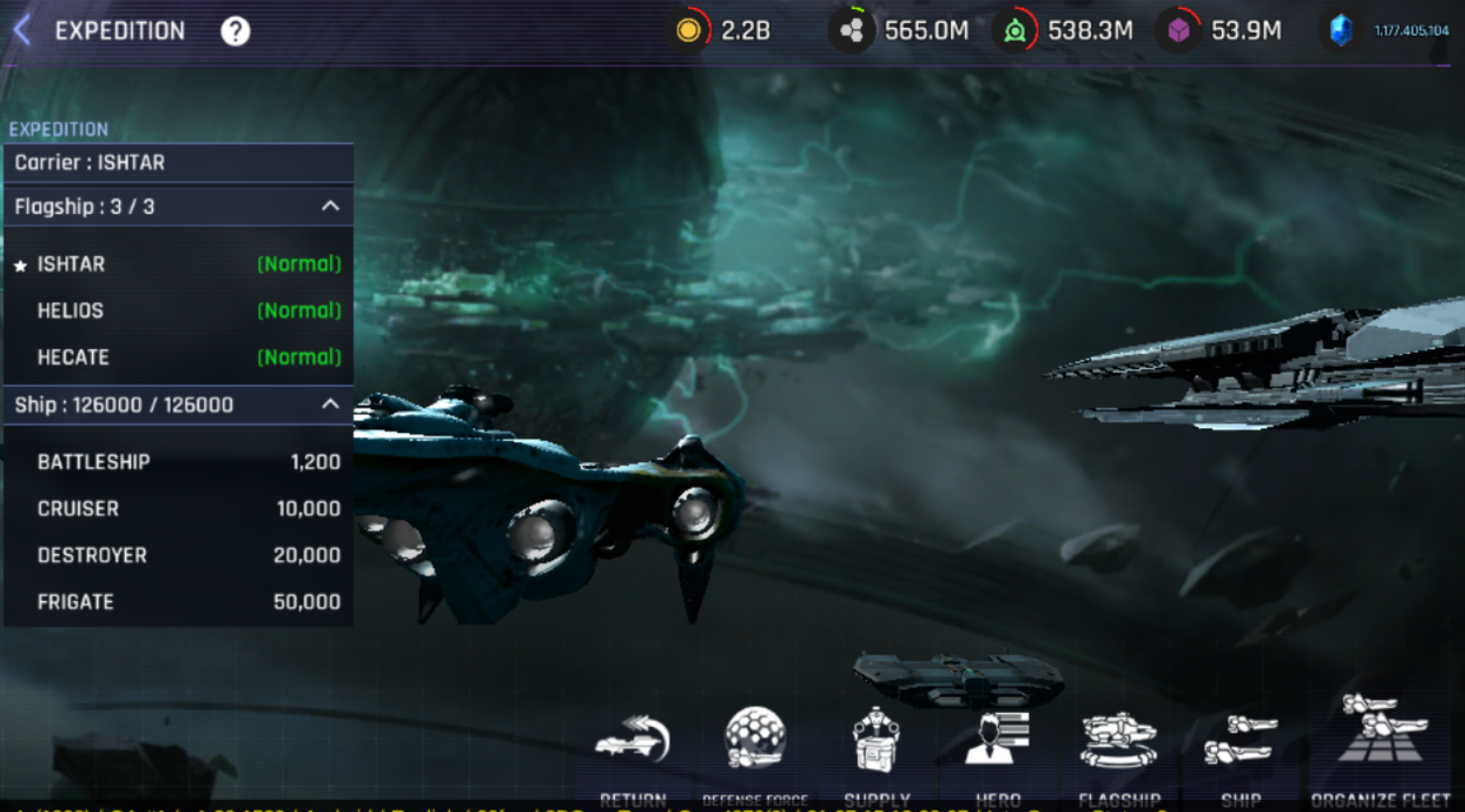 - As the flagship representing the expedition, the shape of the flagship designated as the commander is displayed on the Interspace map.

- It also serves as the flagship of the defending fleet when attacking the enemy expeditionary group. 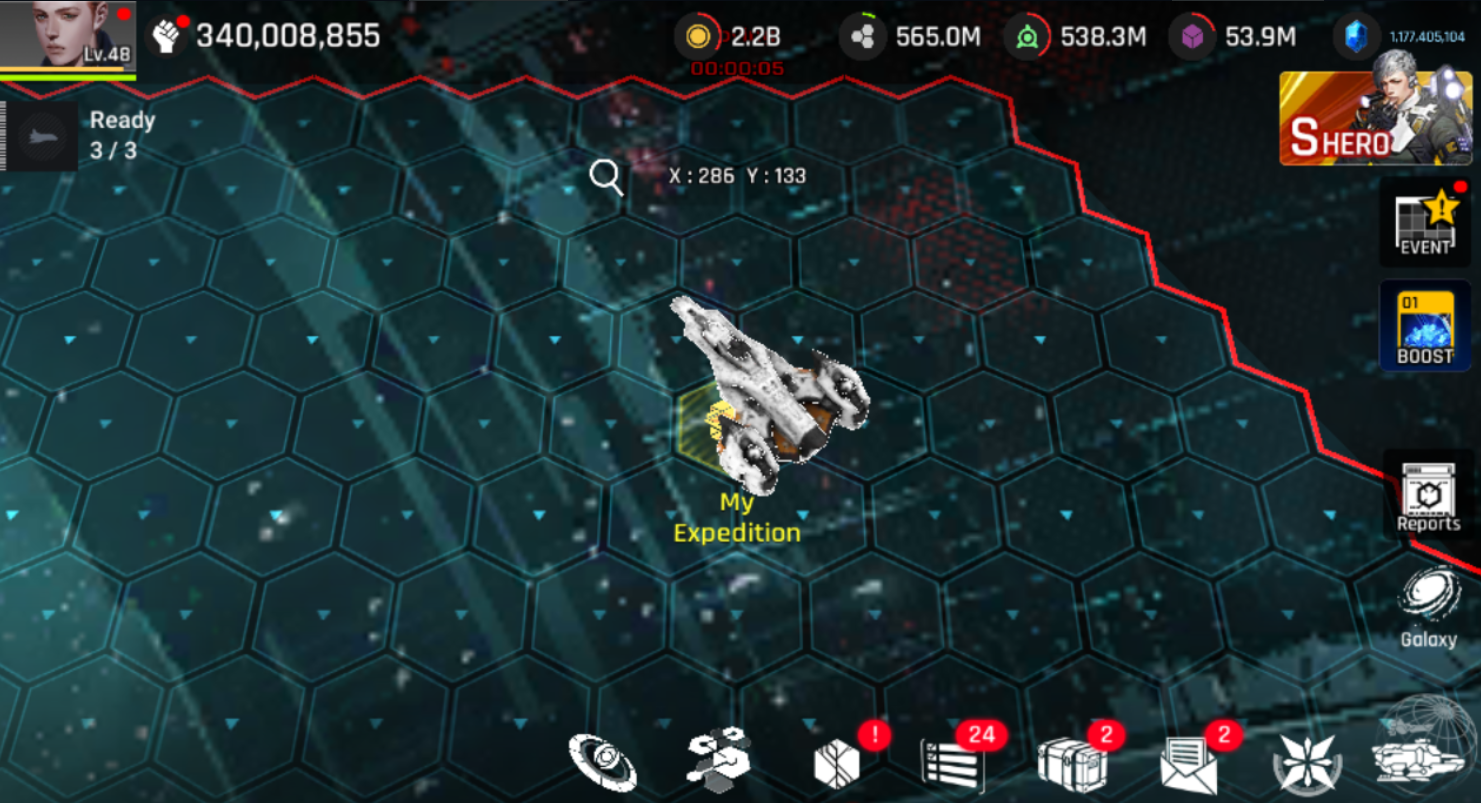 - When participating in or supporting a fleet in an expedition, a flagship must be formed.

- When participating in or supporting a fleet in an expedition, 1,000 or more ships must be organized.

- The maximum size of ships that can be formed in an expeditionary group increases according to the research level of “Expedition Ship Formation".

- Within the limit of the formation of the expedition, you can supply additional flagships, ships, and heroes from your planet to Interspace.

- Troops that have been supplied are temporarily deployed to the Capital Supply Depot, and supply can be carried out when the Expeditionary Team is in the Capital Base.

- To proceed with the repair, the expedition must be located in an area occupied by the faction to which it belongs.

5. Return of the expedition

- When the expedition returns, cancel all activities and immediately move to the capital base.

- The expedition can only move to the base occupied by the faction to which it belongs, and immediately after moving, the following rules apply the waiting time for movement.

※ However, if there is a fleet in sortie or support in the expedition, it is impossible to move.

- If the sector status is neutral or invaded, war with other factions will proceed.

- Fleet attacks and gathering attacks are possible against the enemy expeditionary group or the base occupied by the enemy faction.

- You can only attack from the base connected to the base where the expedition is currently located.

※ How the war progresses in the sector with the ownership

- The objectives of the invading and defending forces are as follows.

º Invading Forces: Capture all enemy citadels within 4 hours or capture at least one enemy citadel to make it neutral.

- Occupy all Citadels in the sector.

- In order to sortie, you must form one flagship and more than 1,000 ships.

- A fleet can only be dispatched if the base where the expedition is located is a territory occupied by a friendly force.

- The fleet sent to the base will be maintained for up to 24 hours, and if defeated in the battle of the defensive fleet, it will return to the expedition.

4. Return of the expedition

- If all flagships in the expedition are damaged or the number of normal ships is less than 1000, the expedition will be forcibly summoned to the capital of the force it belongs to.

- Faction Contribution is a new currency that can be acquired in Interspace.

- When you join a faction for the first time, you will be given the title of ‘Faction Member’.

- After that, if you gain a lot of contribution points and rise to the top ranking, you will be appointed to the position of ‘corps commander’

- When you become a corps commander, you can lead battles in Interspace with the following privileges.

- This is a function that can expel a commander who behaves incorrectly on the battlefield to the capital.

- During the time set by the commander, you cannot move to another sector or proceed with additional battles.

- The set time can be selected by the corps commander, and sectors designated as battlefields are displayed separately on the map.

- You can set reinforcement recommendations for defense fleets that need to be strengthened intensively.

- The maximum number that can be specified is specified, and you can obtain rewards by strengthening the defense fleet that has been recommended.

- Acquired contribution points can be exchanged for ‘coin’ items that are used as goods in Interspace.

- You can purchase items necessary for growth at the designated shop according to the 3 types of coins.

- Improvements in ship production-related areas suggested by many commanders are underway.

- Ship upgrade time adjustment: Depending on the ship class T1 ~ T11, the basic upgrade time will be reduced by up to 97%

- Ship repair time adjustment: Depending on the ship class T1 ~ T11, the basic repair time will be reduced by up to 50%

- Adjustment of ship production resources: Depending on the ship class T1 ~ T11, the base resource amount is reduced by up to 30%

- Adjustment of ship repair resources: Depending on the ship class T1 ~ T11, the base resource amount is reduced by up to 30%

- Adjustment of ship upgrade resources: Depending on the ship class T1 ~ T11, the base resource amount is reduced by up to 40%

- Minor text & errors have been fixed.

- The names of some special flagships are improved to be identifiable.

※ Regarding the update time and additional content on July 21st, a separate notice will be provided through the second notice.

We look forward to your support for this new content. We will continue to do our best to update and improve our game.